Commscamp – the annual unconference for communications-types in and around the public sector. I went, I found it hard to choose between the sessions on offer, I listened to interesting people talk about a host of communications topics, I ate cake.

What did I learn?

This session was led by David Worsell who you can find on Twitter @dworsell with some input from me asking how can we reach younger people as their social media use diversifies?

Where are all the young people? 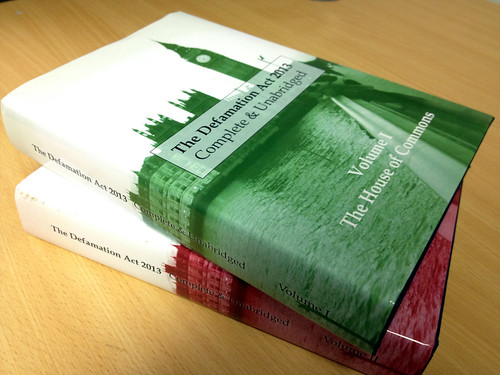 Photo: The Defamation Act 2013: Complete and Unabridged by RobertSharp via Flickr

Just one week to go until the General and Local elections, which in the district I work in means one Parliamentary*, 19 district and four parish polls.

Working with elections, graphics, web and mapping colleagues, we wanted to pull together some useful tools to help local voters. Looking at what other councils have done previously, we plumped for an online polling station finder and infographics showing Parliamentary and District Council candidates and previous results.

As a rural district, my area is entirely made up of villages. We have 120 polling stations, but only one location per village as we tend to run double stations. Most stations are in the same place each year, so why the need for a map, especially when we send out polling cards which give all of the relevant information?

You can find the map here – covering the whole district. We’re looking forward to seeing how many people use it in the run up to, and on, polling day.

Information about candidates for all polls is available on the council and other websites, as are details about previous poll results. It’s not all in one place though, so taking a leaf from the fantastic election work from Birmingham City Council’s newsroom over the last few years, we’ve designed infographics for the Parliamentary and District elections.

Each infographic is available on the Council website as PDFs, and via Flickr as image files with a creative commons licence. We’ve also provided them to election count and local media via Dropbox, and sent links to local political bloggers who have kindly shared them with their followers.

Why no infographics for Parish Councils? Logistically, creating them for the four Parish Councils going to poll, and the 28 which have seen candidates elected unopposed, is more difficult:

We have still made candidate information available, but via the standard electoral Statement of Persons Nominated and Declaration of Results. It may be that we’ll come up with a more user-friendly way to do this in the future.

This post is a chance to share my favourite thing in my garden and a fantastic crowdsourced research project.

The black squirrel in this video took up residence last year after a stand of horse chestnuts was felled locally, forcing him and his friends to move home.

Black squirrels are the same species as grey squirrels, just with a different pigment, and are commonly sighted in East Anglia after a gaggle of them were released in Woburn around one hundred years ago.

Anglia Ruskin University have been crowdsourcing black squirrel sightings for a few years on their Black Squirrel Project website. The project aims to: “gather data on the geographical range of the grey and black squirrel in the British Isles. This data may help explain why the grey squirrel is such a successful invader here.” It’s a fun, easy to use website and you feel that you’re involved in some interesting scientific research. That’s a great use of the web in my book.

Earlier this week Ed Campbell, a BBC journalist, blogged about how footage he shot on a smartphone at Heathrow Airport was used for the lead story on the News at Ten. His post outlined how training and a proprietary app had helped him easily film and upload his video.

From one perspective, the story was interesting because it shows just how far smartphone video and uploading technology has come. What interested me as well though, is the issue of filming permits. Heathrow Airport media centre has a section for applying for a ‘breaking news’ among other filming permits, and the airport states that anyone found filming without a permit will be asked to leave.

In his post, Campbell states: “What we were clearly lacking was stuff from inside the terminal … The desk had asked permission to film and been knocked back. Fortunately two of us were kitted out with iPhones fitted with PNG [the BBC’s filming app]“

“Once or twice I sensed I was being clocked by the terminal staff and moved on. But the sheer ubiquity of iPhones meant that for all they knew I was just another frazzled would-be passenger updating his Facebook status.”

“I’d covered the basics, and grabbed and sent a few more ‘nice to haves’ before heading back to joining my colleagues. One of them had brought an ENG camera to Terminal 2 and gathered more material that way, but was quickly spotted and thrown out by the terminal staff.”

“When you are filming on a phone as opposed to a camcorder or DSLR, you can just blend in and melt away, as easy as that. No-one bothers you, or asks what you’re up to, because, well, everyone has a smartphone, right?”

He’s absolutely right. How can you police filming when so many people have their own camera in their pocket? In the comments section of the blog, Campbell points out that members of the public were taking pictures and uploading them to media.

The ubiquity of smartphones, and the emergence of live streaming apps like Meerkat and Periscope, mean that film permits for breaking news are a throwback to the days when the press office was an all-powerful gatekeeper. And however much it may be railed against, technology continues to open those gates wider and wider.

Possibly the best presented pop tart I’ve ever seen, and one of a selection of junk food presented in haute cuisine style by the not-so-subtly named “Chef Jacques Le Merde” on his Instagram feed.

Chef Jaques’ creations may carry tongue-in-cheek fancy descriptions like “Doritos soil” and “coleslaw ash” but as they never pretend to be something they’re not, we appreciate them for what they are.

From a PR perspective, this is what we’re often asked to do as practitioners; present an idea, information or product in as positive a way as possible while still being truthful – the McCann advertising mantra of “Truth Well Told”.

The danger comes when we’re asked to “spin” and present a junk food idea, product or decision as haute cuisine. It might look the part, but one bite and people will immediately spot the pop tart. Presentation is nothing without substance.

Once upon a dark January evening, many moons ago, a man from a city that is everywhere released a hashtag that travelled far and wide. It sparked imaginations wherever it unfurled, sending people rushing to bookshelves for inspiration. The hashtag? #LocalGovNovels

@Localopolis Stig of the municipal dump and recycling centre. #LocalGovNovels

Lord of the FOIs #LocalgovNovels

#localgovnovels Of Mice and Pest-control Men

Journey to the Leisure Centre of the Earth #localgovnovels

To see just how the #LocalGovNovels story progressed, read on via Storify

a day without OJ - A comms, digital & PR blog by Ross Wigham

"A day without orange juice is a helluva long day."

Musings from the world of public sector transformation - my views alone

Thoughts from the fens

Blog about PR, media, marketing and other random stuff